Why is there such an abundance of bird life in Johannesburg?

There are several reasons:

The Grey Loerie (the go-away bird)
The grey go-away-bird, also known as grey lourie, grey loerie, or kwêvoël, is a bold and common bird of the southern Afrotropics. They are present in arid to moist, open woodlands and thorn savanna, especially near surface water.
They regularly form groups and parties that forage in tree tops, or dust bathe on the ground. Especially when disturbed, they make their presence known by their characteristically loud and nasal “kweh” or “go-way” calls, with the last syllable typically a descending drawl. 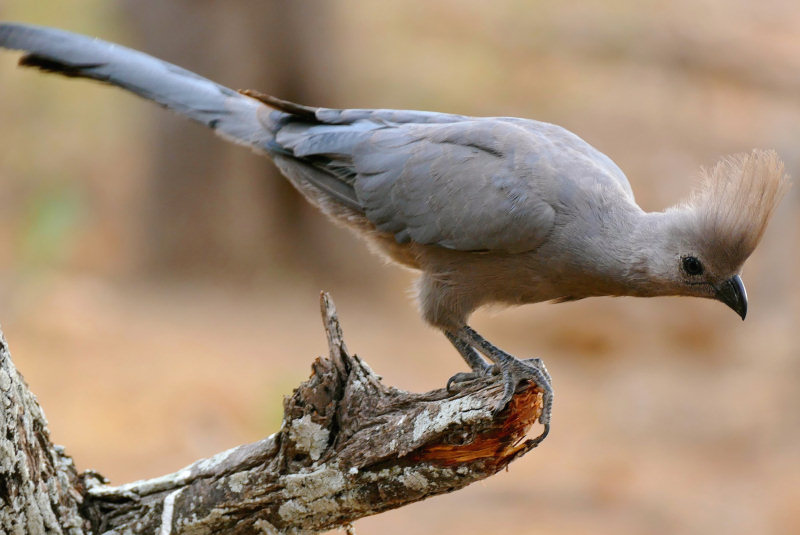 Hadedas
A visit from a hadeda is a sign of a healthy garden, teeming with smaller wildlife species. Their probing search assists with the aerating of soil and the control of insect populations. Apart from earthworms, their diet consists of slugs and snails, spiders, crickets, insects on the ground and small reptiles (lizards and frogs). Despite their notorious racket, they are generally only vocal at dawn or when disturbed. 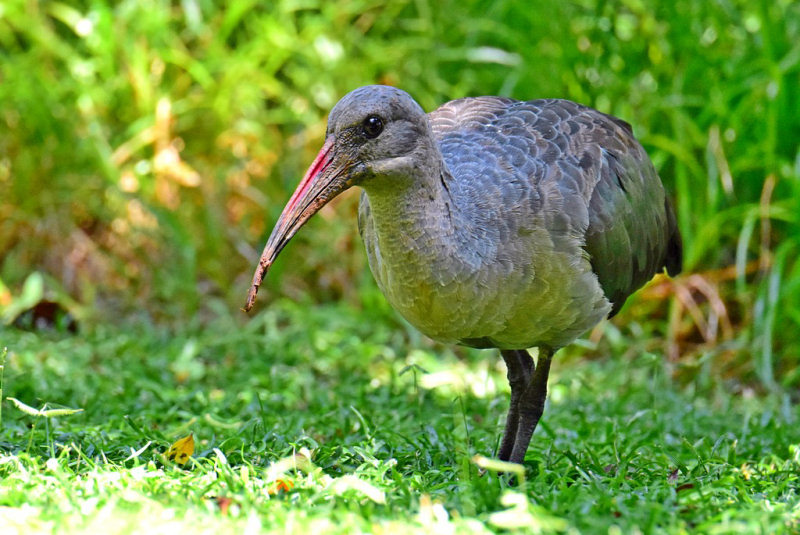 Piet-my-vrou (Red-chested cuckoo)
The familiar call of Piet-my vrou is associated with summer as the Red-chested cuckoo returns from central Africa to southern Africa around September and flies north again in April. It parasitises the nests of robins, thrushes and Cape wagtail. 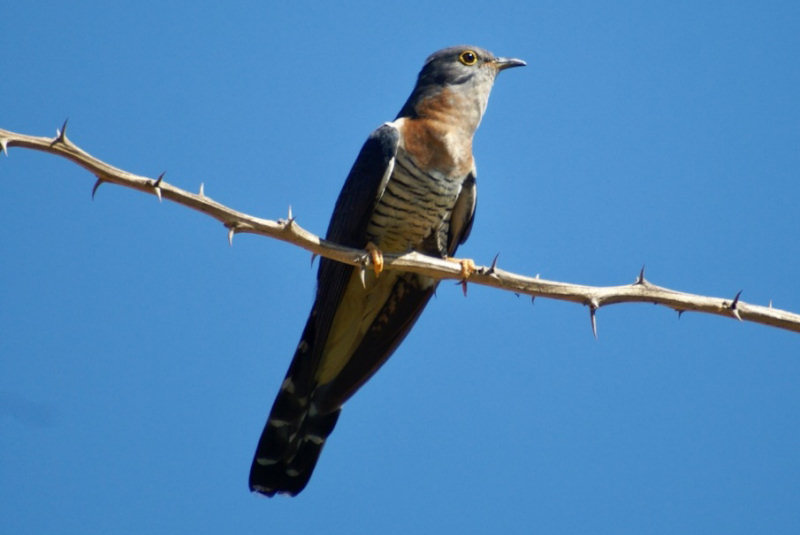 Diederik’s Cuckoo
Diederik’s Cuckoo, derives its name from its persistent call of dee-dee-deedereek while perched prominently in parks, gardens and woodland areas. It is a common summer visitor and the male bird is predominantly green on back and wings with a white chest, white eye stripe and red eye. This bird lays its eggs in the nest of sparrows, weavers, bishops and flycatchers. 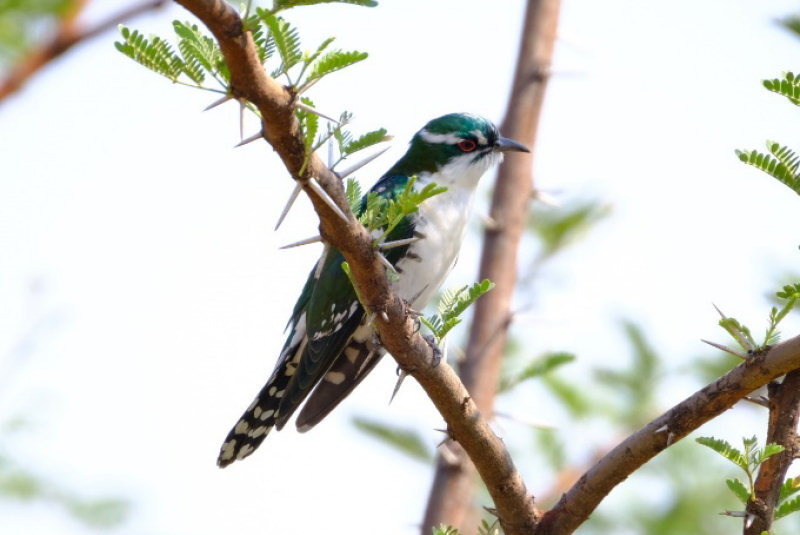 Southern Masked Weaver
This bird is found throughout South Africa and the male is easily distinguished by its bright yellow breeding plumage and black face. Non breeding males resemble the female which have a greenish back, buffy breast and brown eye. The male will build several nests which if a female accepts, she will add a soft lining. Rejected nests are stripped bare by the male bird. 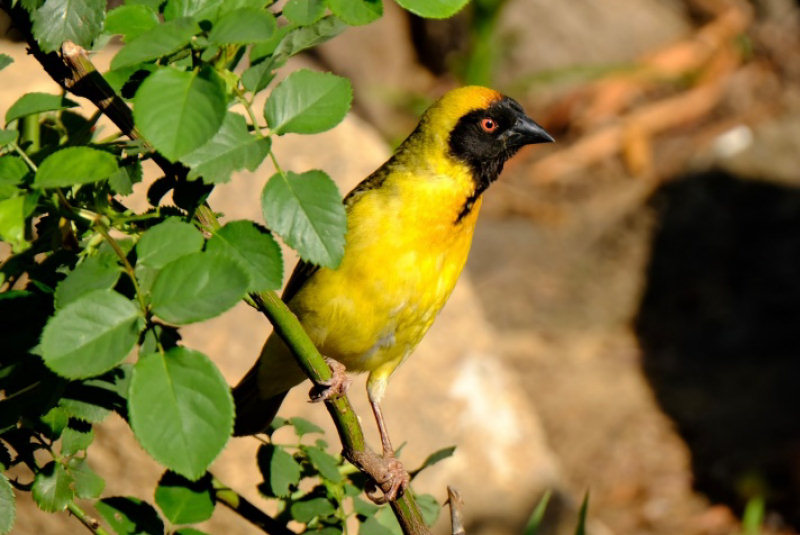 Cape Weaver
Distinguished from the Southern Masked Weaver by having an orange wash over its face and a white eye. Found mainly in the southern and eastern parts of the country. The Cape weaver often builds its nest over water hanging down from a thin tree branch. 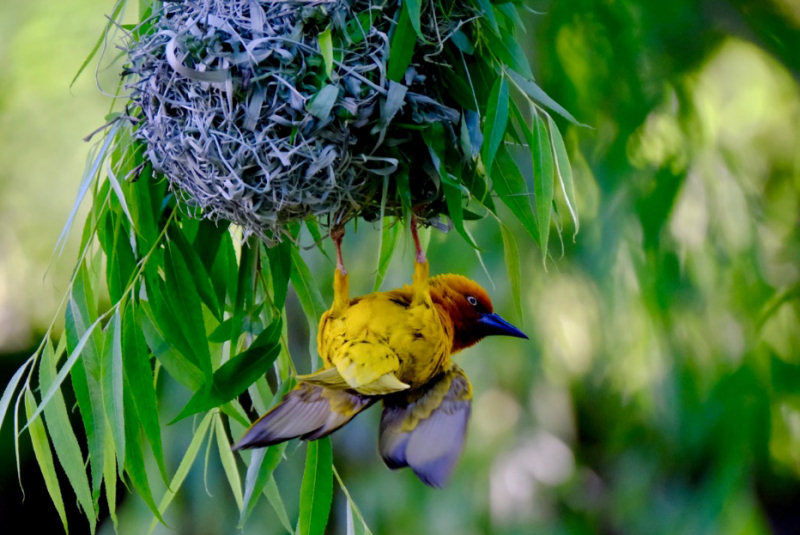 Thick billed weaver
The only non-yellow weaver in the country. The male is predominantly dark brown with a white spot on its forehead, while the female is heavily streaked on its chest and lighter brown on the back. Unlike other weavers whose nests suspend from a thin branch, the Thick-billed Weaver builds its very neat nest between two reeds some two metres above a stream. 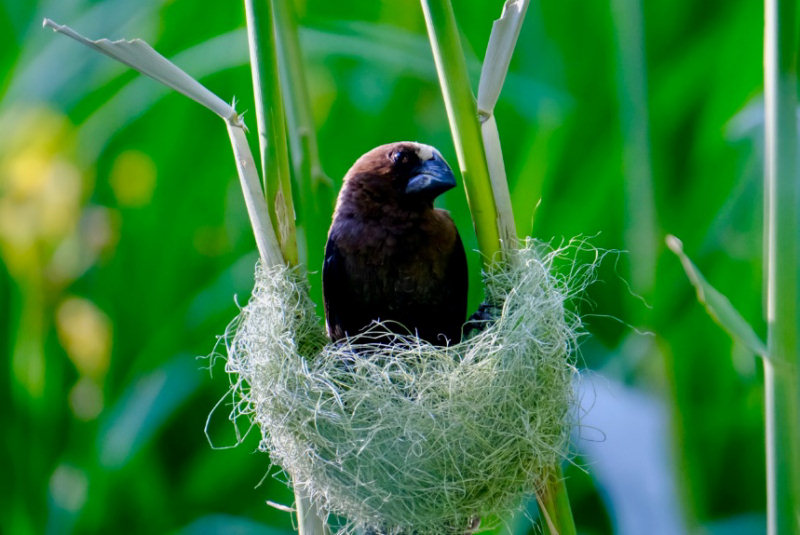 Red Bishop
Red Bishop is found through the country and is usually found close to water. The male is dimorphic, that is it changes the colour of its plumage when breeding from the drab brown of the juvenile and female to the striking red back and head, and black face and breast. Males may breed with up to seven females in a season. 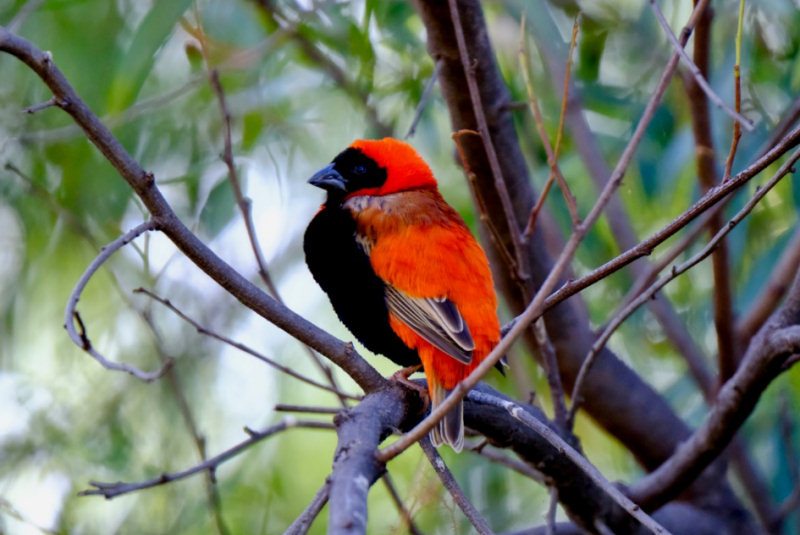 Burchell’s Coucal
Burchell’s Coucal is nicknamed “the rain bird” as its descending bubbling call is said to be a harbinger of rain. This heavy bird is a clumsy flyer and it prefers to skulk in long grass, woodland and suburban gardens. It is a cousin of the cuckoo but does not parasitise other bird’s nests. Laughing Dove One of the most common birds in the country. It has adapted well to gardens and city centres and may be distinguished from other doves by not having a black collar. Its call is a distinctive rising and falling coo-coo-coo-coo-coo. 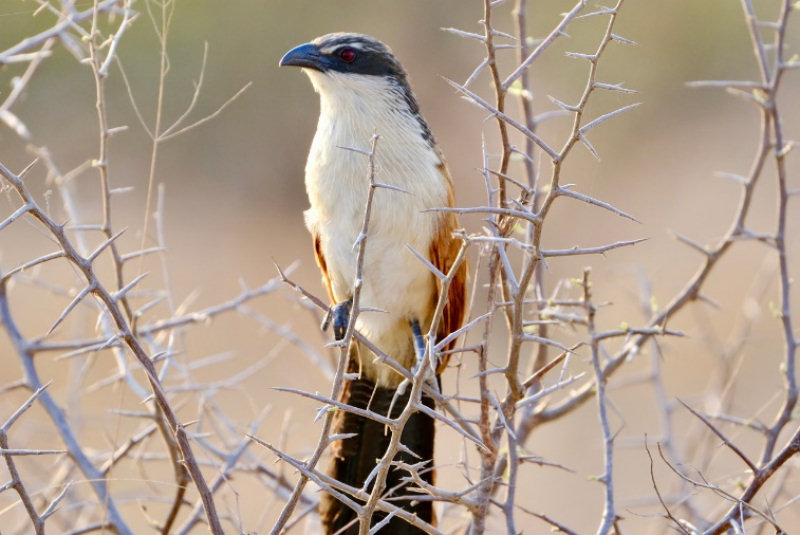 Southern Boubou
A member of the shrike family with a typical sharp hook on the end of its bill which it uses to spike its insect prey. Similar in colour to the fiscal shrike but having a rufous wash on the underside of its belly. 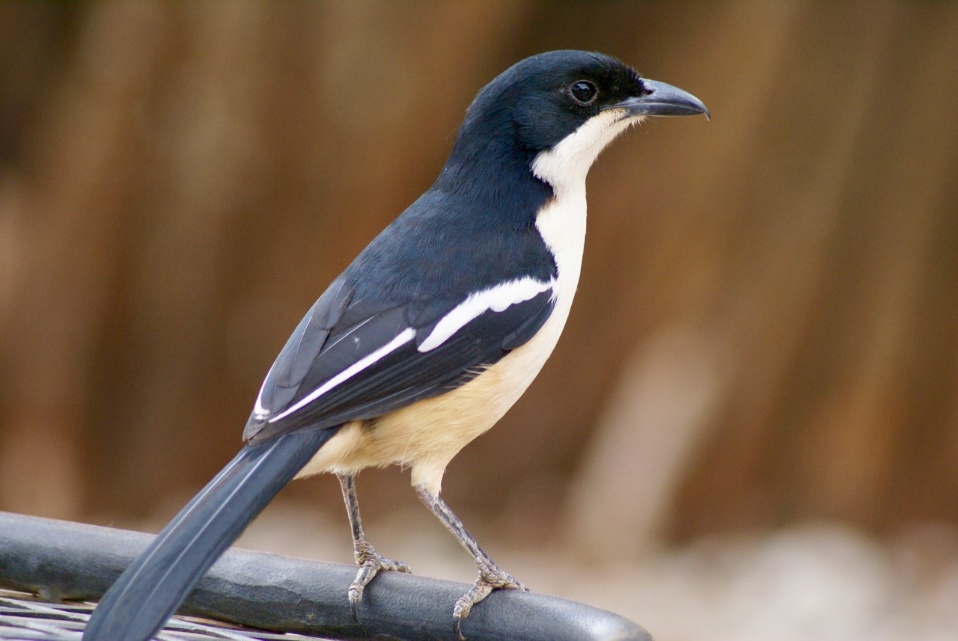 Wattled Lapwing
Wattled Lapwing is the largest lapwing in the region and found extensively in the north eastern parts of South Africa. Easily recognised by its bright yellow wattles on either side of the face. Lapwings nest on the ground and their eggs are mottled to aid with camouflage. Newly hatched chicks are precocial and can almost immediately walk behind the parent birds. 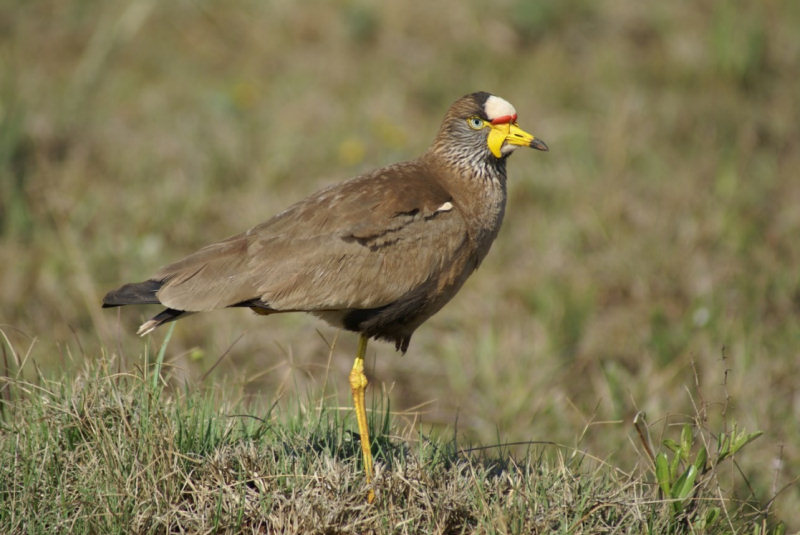 Cape Robin-chat
Often the first bird heard in the dawn chorus of bird calls. Distinguished by its orange and white underparts and white eyebrow stripe. The Cape Robin-Chat forages for insects in leaf litters and is a common visitor to suburban gardens. 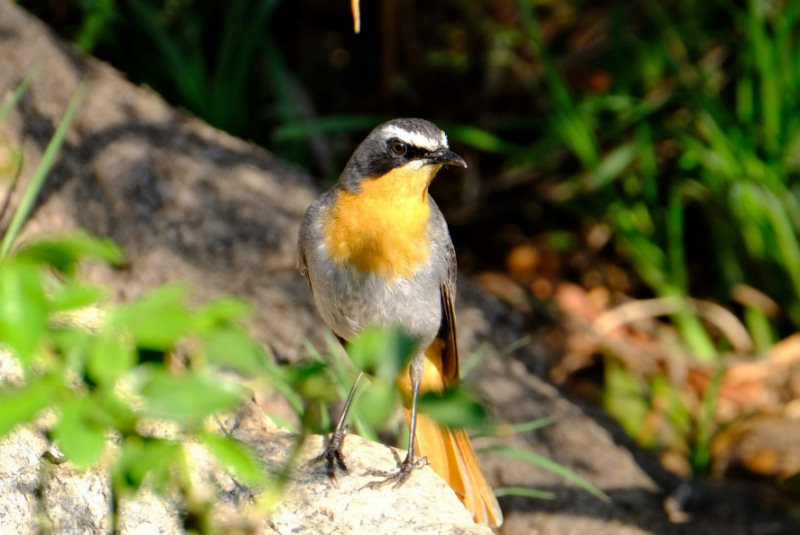 Glossy Starling
Easily identified by its iridescent bluish green plumage and yellow eye. Starlings are gregarious and garrulous and are a familiar sight in suburbia. They can be very territorial and aggressive to other birds especially around their nest which they make in a hole in a tree that has usually been made by a barbet or woodpecker. 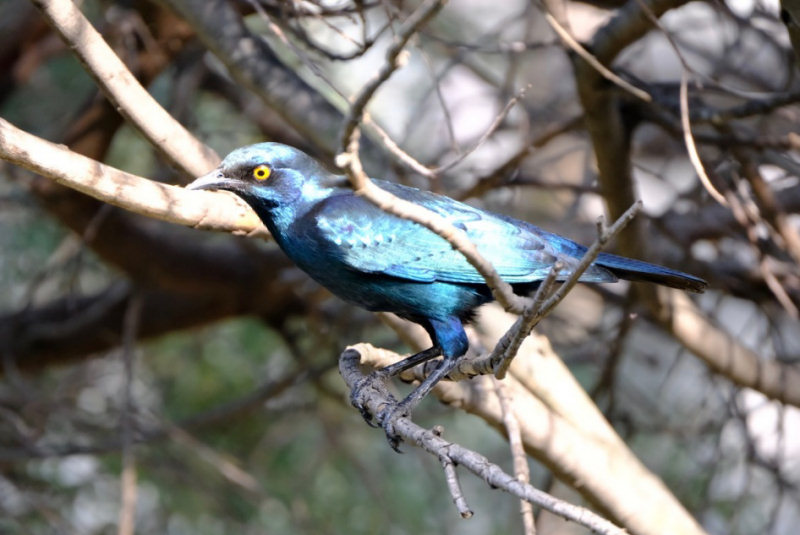 Spotted Eagle Owl
This nocturnal medium sized owl is found throughout the country. Eagle owls are so called because of their feathered legs, a feature they share with eagles. Their call is the typical hooting hu-hoo sound. Owls are often mobbed by smaller birds which see them as a threat and indeed the Spotted Eagle Owl will catch any unsuspecting small bird, reptile or mamma. 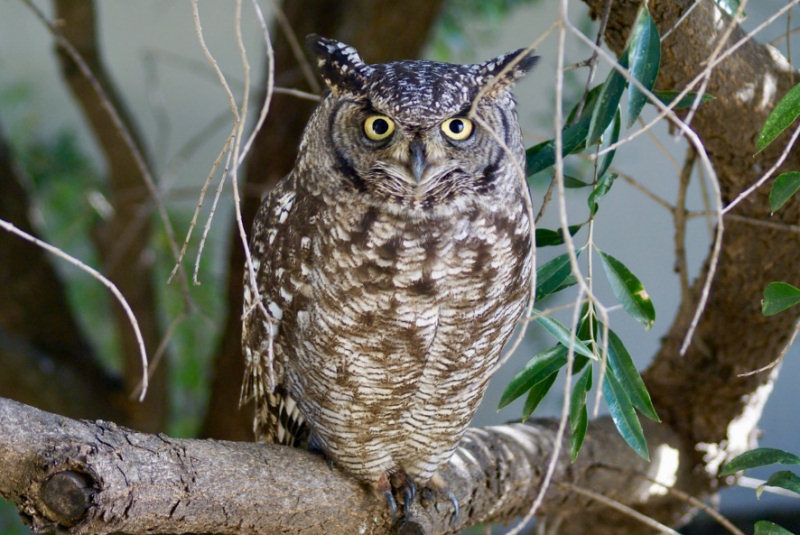 Laughing Dove
The Laughing Doves are small African pigeons that were named for their distinctive coo vocalizations that are reminiscent of human laughter. 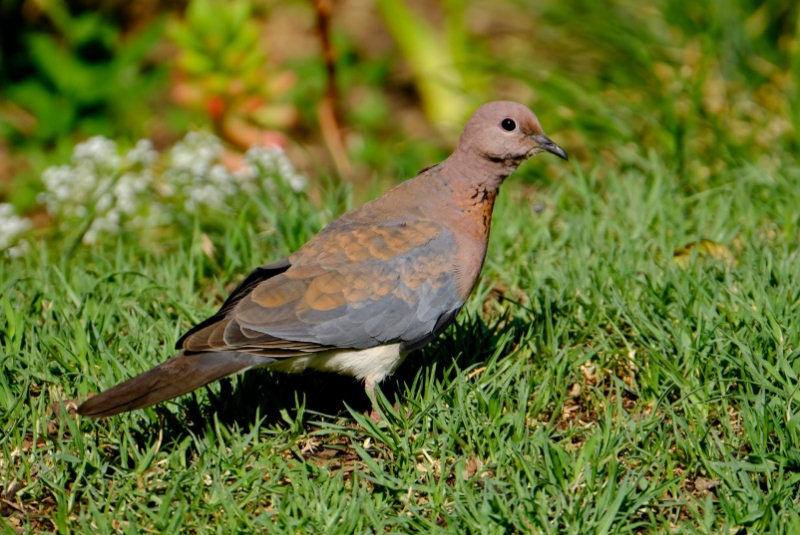 Rose-ringed parakeets
Rose Ringed Parakeets – escaped from aviaries initially but now breeding in the wild. Scientists often see these birds as an Invasive Species to be controlled. Many people, however, see them as lovely creatures and they welcome them into their gardens. 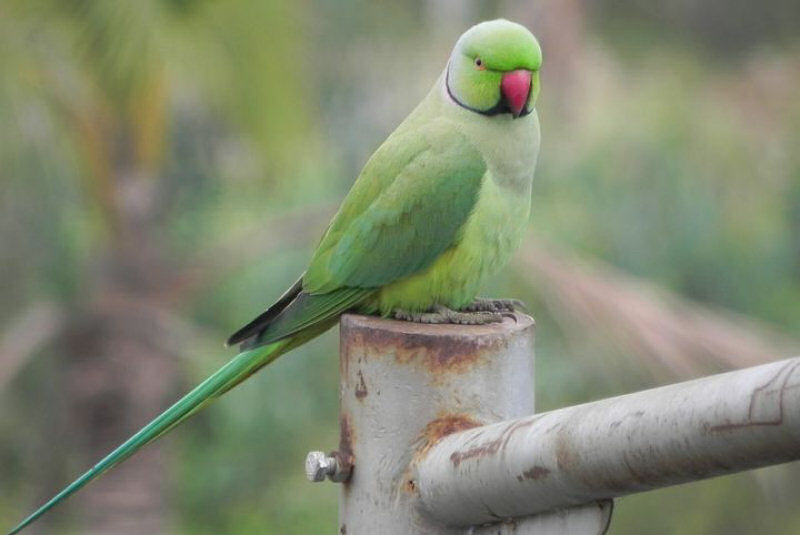 Many photos by Anthony Cavanagh.